We plan to add the fourth character In mid-September!

A tale of demons and angels who fall in love with a human.

Led by the red moon,
you reach an alternate dimension called «»Nightmare.»»

Loved by angels and demons who carry secrets,
will you be able to return to the real world?
Or…

■Strong points
✓Free to play and free installation!
✓You can read the whole romance story without recurring to in-app purchases!
✓Choices you make don’t affect the ending
✓Read 5 episodes(chapters) every day for FREE!
✓Unlike other otome games(choice game), this one has no missions/checkpoints!
✓The game doesn’t force you to buy contents!
✓Have different languages(English, French, German)!
✓You can get great cgs!
✓You can re-read the romantic stories anytime
✓An exciting English anime love games that lets you fall in love
with the hottest guys you’ve ever seen!

■Love stories
You are an ordinary office lady.
On your way home from the office,
you are led by the red moon to a strange alternate dimension called «»Nightmare.»»

In front of you appear mysterious, handsome demons and angels!
They possess massive secrets…!?

You battle political intrigue, betray,
and fall in a forbidden love.

The alternate dimension transforms at dizzying speeds.
You meet the person you are fated to be with.

■Here are the handsome guys you can choose from!
♥Lucia
Species: Demon
A willful feudal lord who loves to tease
But behind that mischievous attitude, lies a secret…

♥Levy
Species: Demon
Lucia’s younger brother who is proud and aggressive.
However, when you get close to him, he has a surprising side…

♥Kaim
Species: Demon
A coolheaded butler who never shows his smile.
While he appears stern, perhaps his true self is not…?

♥Mikael
Species: Angel
He never shows anyone the depths of his stubborn heart.

♥Noel
Species: Angel
Always quiet and expressionless.
But when he opens his mouth, he is somewhat harsh.

♥Ricardo
Species: Angel
He loves to treat people cruelly.
The more they resist, the more he enjoys it.

♥Mefy
Species: Demon
Always smiling and emitting an atmosphere of kindness.
However…

♥Oswald
Species: Demon
A nurturing gardener who is respected by the people around him.
However, he holds a secret he has never told anyone.

♥Lucas
Species: ?
A mysterious young man who appears suddenly.
Perhaps he is neither an angel nor a demon…

■Recommended for you if…
✓You have never played a romance game or otome game for girls before.
✓You like apps for girls who like visual novel, comics for girls,
visual romance games, romance manga.
✓You want to experience a mature relationship and have a love that
feels destined with a handsome guy.

■Warning
✓Uninstalling the app or clearing the cache will reset player data.
✓This game will not work offline. Make sure you have an internet connection when you play.
✓Update your device’s software to version 4.1 or later to play. 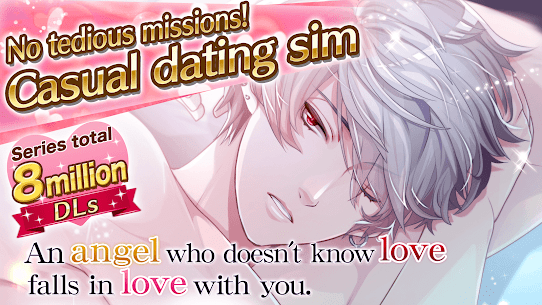 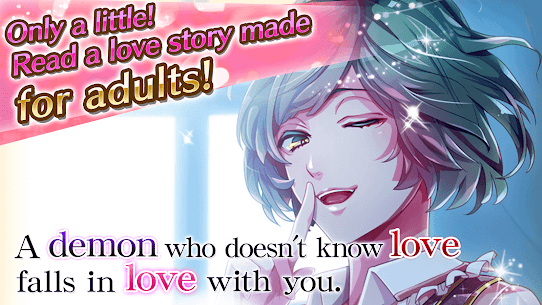 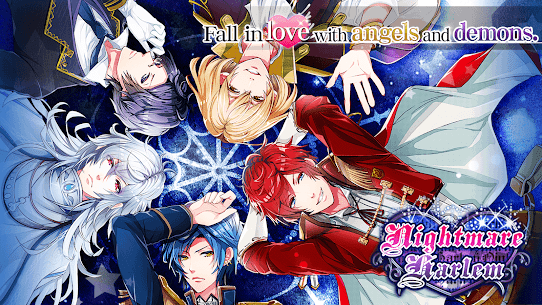 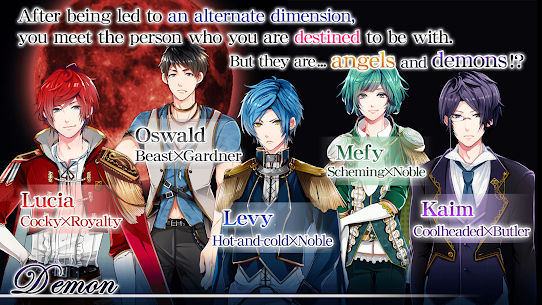 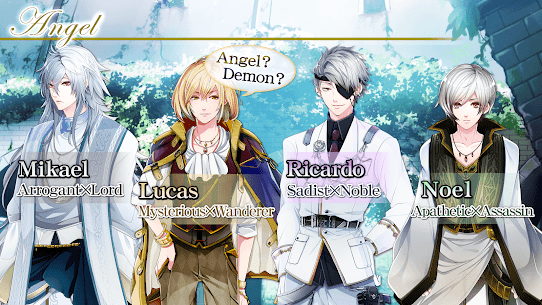